When people think of visiting Brazil, there is a reason that Rio de Janeiro usually comes to mind. It’s one of the most culturally rich and exciting places in South America, and is the third largest city on the continent, plus it’s the number one most popular tourist destination south of the Equator! To find out why, one need only see it first hand and experience what’s on offer.

Near the Atlantic Ocean the cool winds make the heat more bearable compared to the more humid inland areas, but overall Rio enjoys hot weather almost all year round, with a rainy season during our northern winter (which is summer for the Southern Hemisphere). Thanks to the generally favourable conditions, the natural surroundings of the city have been able to flourish and the regional landscape is an incredible sight to behold for any tourists. 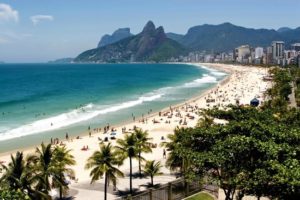 The city itself has seen a lot of development and investment over the years, since it has played host to many of the most high profile events held in the country. The 2014 FIFA World Cup was hosted in the city, and this year the 2016 Summer Olympics became the main focus. Aside from injections of cash from the numerous major multinational companies involved with these events, the government has focused its efforts on reducing poverty in the city over the past few years, in the hope of letting Rio catch up with its international counterparts.

The famous carnival is a must-see attraction for people visiting Rio de Janeiro at the right time of year, so it may be worth planning your trip around this. However, the city has much more to offer besides in terms of activities and attractions. These include incredible conditions for surfing and waterskiing off the coast, rainforest hiking trails to explore the wild areas surrounding the city, and the iconic Christ the Redeemer statue standing over the entire city.

This site uses Akismet to reduce spam. Learn how your comment data is processed.

If you're on a quest for adventure--welcome home. We’ve scoured the Earth for the most unique and exciting destinations for those who want to experience the extraordinary. So sit down and settle in, this is going be one heck of a ride.